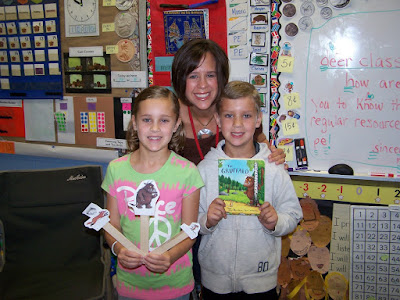 The students were quite surprised today as we were celebrating our second "Mystery Reader." At the stroke of ten, an announcement came over the P.A. system that our "Mystery Reader" has arrived. While she was walking slowly toward the classroom, five clues were given to the class (which were written earlier) and the students made guesses as to who they thought it could be. Clues such as: "I walk my kids to school everyday" and "I enjoy working in the classroom" were given. Well, it wasn't two clues into it when "D" lit up and said that it's his mom! Well our Mystery Reader was his mom and Mrs. G. came in with a wonderful book called, "Gruffalo". Also with her was her daughter "A" who was a former student. "A" worked the puppets as her mom read the book. The book was about a mouse who is taking a stroll through the deep, dark woods when along comes a hungry fox, then an owl, and then a snake. The mouse is good enough to eat but smart enough to know this, he invents . . . the gruffalo! As Mouse explains, "The gruffalo is a creature with terrible claws, and terrible tusks in its terrible jaws, and knobbly knees and turned-out toes, and a poisonous wart at the end of its nose. But Mouse has no worry to show. After all, there’s no such thing as a gruffalo. . ." . The student's enjoyed our Mystery Reader's wonderful reading of this book and you know "D" was as happy as could be to have his mom and sister enjoy some time in his classroom. Thank you so much Mrs. G. - Mystery Reader extraordinaire!
at March 19, 2009

Our tribe this year was the Inuit. Our students learned about the Inuit culture which included their food, housing and shelter. They sang ... 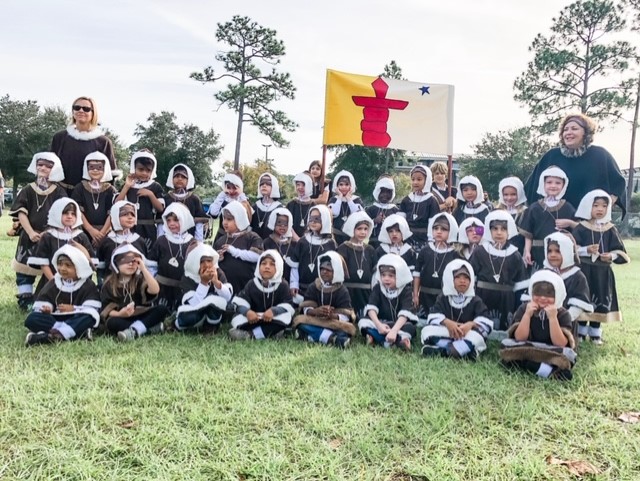 Maria Mallon & Cheryl Dillard
We are officially called "The Mall-ards"! Hi! My name is Mrs. Maria Mallon I have been a looping teacher at Chets Creek since 2001. I am a Certified Teacher of the Gifted and have a Masters in Education in Reading. I was Chets Creek Teacher of the Year for 2005-2006 and Rutledge H. Pearson's Teacher of the Year for 1999-2000. I love to go to the beach, the movies, and shop! It is our intention that this blog helps you feel more a part of our daily classroom life. I am Mrs. Cheryl Dillard and I am Chets Creek Elementary Teacher of the Year for 2018-2019. I am in my 22nd year of teaching. I was also Twin Lakes Academy Teacher of the Year in 2006-2007. I am a Certified Gifted Teacher. I love having the opportunity to spend two years with the same group of students and watching them grow as learners. I keep busy with my family that includes my husband, three children, and two cats named "Lightening" and "Mac." In my free time I love to read and go to the beach. 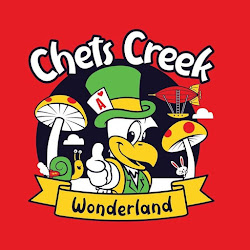 Accept No Limits - Imagine the Possibilities - Expect the Unexpected

Picture Book of the Day